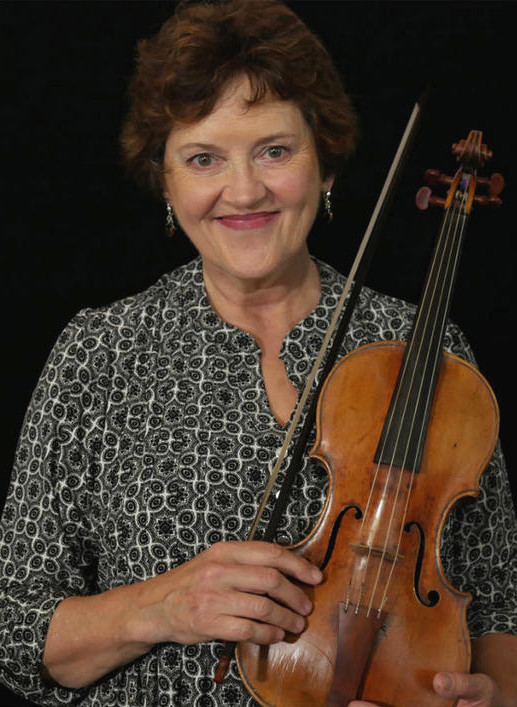 Elizabeth Blumenstock is a longtime concertmaster, soloist and leader with the Bay Area’s Philharmonia Baroque Orchestra and American Bach Soloists; concertmaster of the International Handel Festival in Goettingen, Germany; and artistic director of the Baroque Music Festival, Corona del Mar. She is widely admired as a Baroque violinist of expressive eloquence and technical sparkle whose performances have been called “rapturous” and “riveting.”

Blumenstock’s love of chamber music has involved her in several accomplished and interesting smaller ensembles, including Musica Pacifica, the Galax Quartet, Ensemble Mirable, Live Oak Baroque, the Arcadian Academy, Trio Galanterie, and Voices of Music. She has performed at the Boston and Berkeley Early Music Festivals, the Carmel Bach Festival, the Oulunsalo Soi festival in Finland, and the San Luis Obispo Mozart Festival, among many others. She has recorded over 100 CDs for Harmonia Mundi, Dorian/Sono Luminus, Virgin Veritas, Koch, Naxos, Reference Recordings and others.

An enthusiastic teacher, Blumenstock conducts classes at the San Francisco Conservatory of Music, and teaches at the American Bach Soloists’ summer Festival and Academy, at the International Baroque Institute at Longy, and at the Valley of the Moon Music Festival in Sonoma, California. She began teaching Historical Performance at Juilliard in 2016. She plays a violin built by Andrea Guarneri in 1660, in Cremona, which is on generous loan to her from the Philharmonia Baroque Period Instrument Trust.