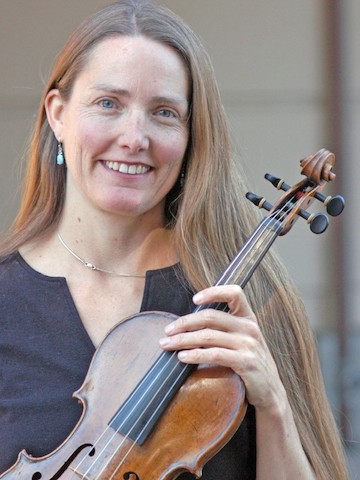 With degrees from UCLA and USC, Einem studied violin with Alex Treger and Alice Schoenfeld, and baroque violin with Monica Huggett. She toured and recorded in Europe with Hausmusik and Huggett’s Trio Sonnerie, and in Japan with the Amsterdam Baroque Orchestra, recording and filming half of Mozart’s symphonies under Ton Koopman. Among her many other recordings are the acclaimed CD of Mendelssohn’s Octet with Hausmusik on EMI; Early Music of the Netherlands 1700-1800 with Trio Sonnerie on Emergo; and Eighteenth-Century Music for Lute and Strings with Trio Galanterie on Audioquest.

Jolianne Einem is a featured soloist in the opening concert of the 42nd season, Many Happy Returns, on Sunday, June 19, and on Friday’s The Joy of the Dance program June 24, 2022.

The Festival is grateful to all its individual donors, advertisers and supporters, and for current grant support from: