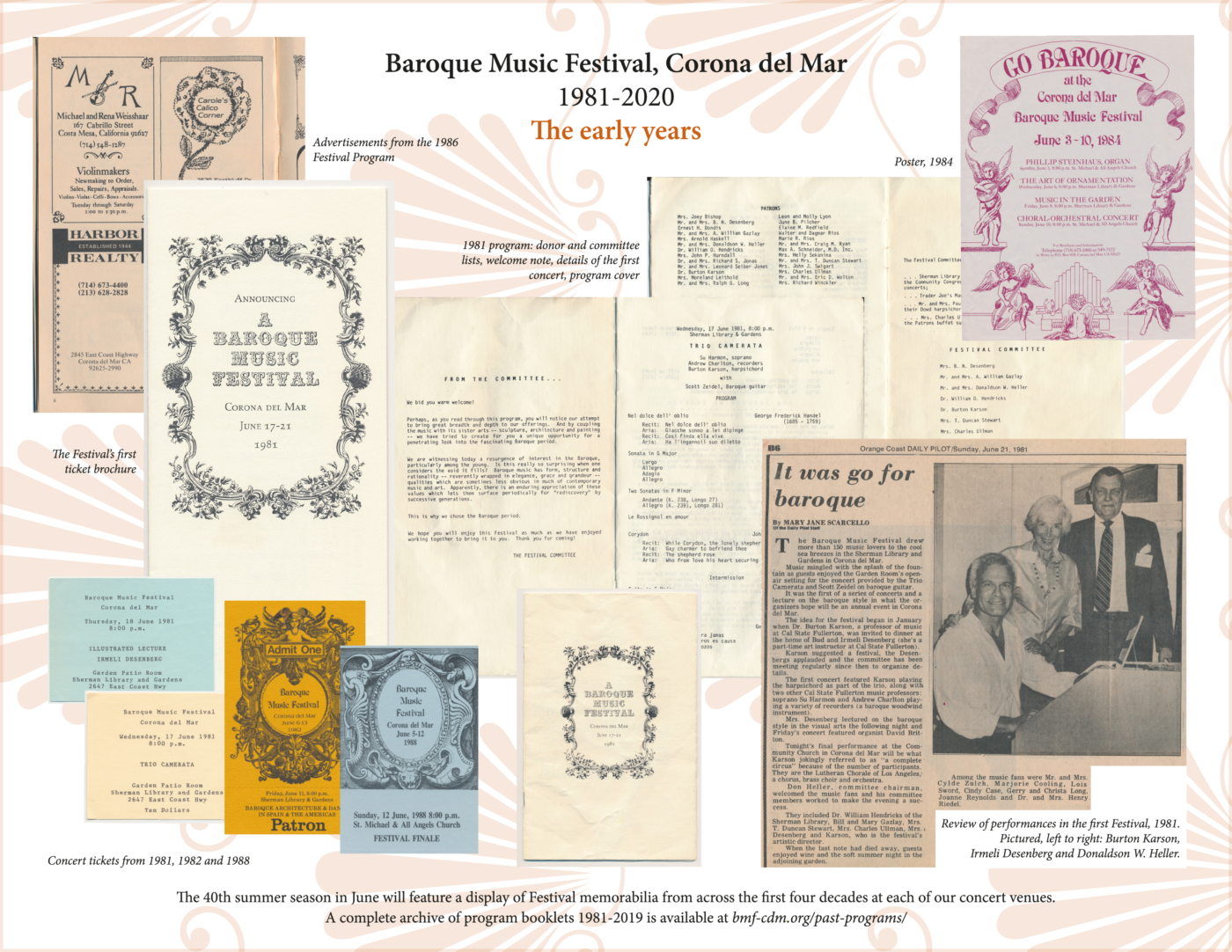 The Baroque Music Festival: Looking Back Over 30 Years
Notes by Burton Karson for the Festival’s 30th season (2010)

The idea germinated at a small dinner party at the Bayside Drive home of Irmeli and Bud Desenberg in late summer 1980. We lamented the dearth of classical music events in Corona del Mar or in all of Newport Beach. Except for a few Orange County Philharmonic Society concerts at Santa Ana High School auditorium, we were having to drive to the Los Angeles Music Center, to the Hollywood Bowl in summer, and occasionally to San Diego for opera.

We discussed the feasibility of a small music festival the next June, when our academic and social calendars would be empty, and quickly created a Festival Committee to research possible venues and dates. The group, all local friends with an enthusiasm for good music, included Bill and Mary Gazlay, Donaldson (our first president) and Dietgart Heller, Bill Hendricks (our second president), Jerry Stewart, Snoozie Ullman and Irmeli, while I served as Artistic Director.

As no auditorium existed (then or now) in our village, we accepted Dr. Hendricks’ offer of the beautiful Sherman Library & Gardens, where he was and remains Director of the Library. The Gazlays, who sang in the choir at Saint Michael & All Angels Episcopal Church, negotiated our use of St. Michael’s and its fine pipe organ, and, through friends, the beautiful Community Church Congregational.

Our printed program for that first season listed 37 Patron Subscribers (Elaine Redfield being the first) and 71 regular subscribers to the complete series. Several remain as patrons to this day, including our long-serving board members Walter and Dagmar Rios. Presidents subsequent to Heller and Hendricks were Irmeli Desenberg, Dr. Winthrop Hopgood, Heather Goss, Sigrid Hecht, Frank Remer, and our current, Ralph E. Smith.

We continued annually, buoyed by Daniel Cariaga’s Los Angeles Times review of our first year: “The no-man’s land between the winter and summer seasons raises some strange one-time-only blooms, but the little Baroque Festival which emerged in Corona del Mar last week deserves to blossom annually.” We persevered due to subsequent encouragement by the Timesand Orange County Register, the generosity of patrons, a show of community support from advertisers in our printed programs, and continuing grants from the Newport Beach Arts Commission.

Our programming has covered concerted instrumental and choral works by all of the well-known Baroque masters, neo-Baroque music by Romantic and contemporary composers, and the first modern performances of long-forgotten pieces that I have found in musical archives in Darmstadt, London and Prague, mostly in unpublished manuscripts — late acknowledged as works of historical importance. We have given premieres of neo-Baroque compositions by contemporary composers Alan Chapman, Andrew Charlton, Lloyd Rogers, and — on commission by us — Michael Eagan, Tania Gabrielle French, James Hopkins, Robert Linn and Craig Phillips.

Our Board of Directors thanks the many other volunteers and experts whose wonderful services we have secured, and we gratefully salute our enthusiastic and supportive audiences who have energized and inspired us to offer great music to our community during these thirty years!