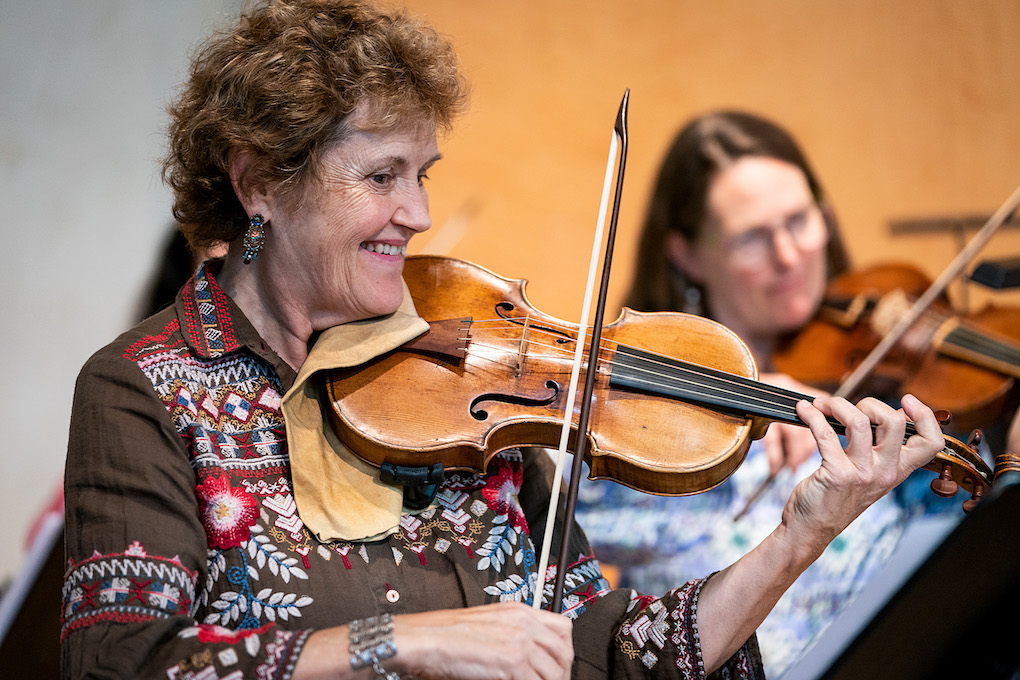 If you look quickly, there appears to be no difference at all between the modern violin and the Baroque violin! Many “modern” violins in use today were made in the late 17th and early 18th centuries, but were subsequently modified in the 19th century to accommodate the needs of the music being written for the instrument at that time. Modern violins have a longer fingerboard, a heftier bridge, heavier base bar (inside), weightier tailpiece, and a more angled neck than their Baroque counterparts. Overall, the “modern” set up — in combination with a full set of metal wound strings and the equally-weighted modern bow — produces a powerful, immediate sound, designed to fill large concert halls and ensure the violin soloist is heard in Romantic concertos above a full symphony orchestra.

The original “Baroque” set up, on the other hand, brings an intimacy and natural warmth to the sound. The parallel neck, gut strings, and lightweight bridge, tailpiece and base bar create less tension when the bow is drawn across the string. The Baroque instrument speaks in a really different way. And, notice the shape of the bow, which also contributes to the unique qualities of the Baroque violin sound. It’s much lighter than a modern bow, with less hair and no metal, and it’s often curved slightly outward, always with more weight at the frog than the tip. The bow creates the shape of the notes that the Baroque masters intended easily, with natural decay after the initial attack, and weaker “up bows” than “down bows” — adhering to the hierarchy of the beats in the bar. Listen for the gutsy “chiff” of tutti strings in fast orchestral movements for just one example of Baroque string instrument sound. There are many! 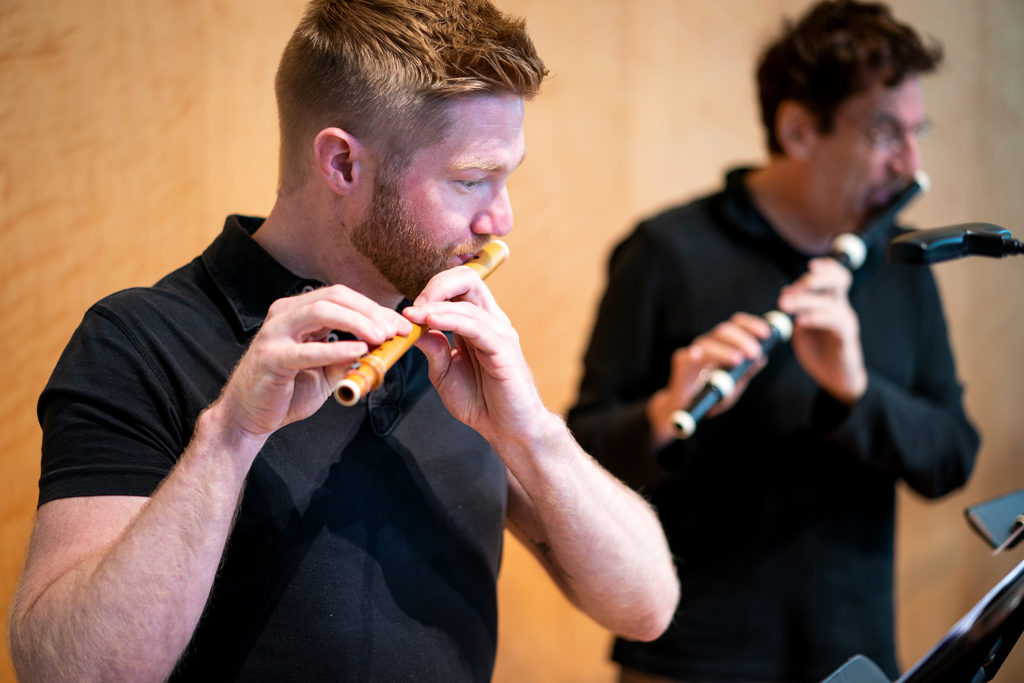 Of all the Baroque instruments that survived the era, the flute was arguably the one most dramatically changed. The revolutionary shift from wood to metal transformed the flute into an instrument that could hold its own in the dynamically supercharged modern orchestra. In my opinion, though some qualities were gained, those that were lost were truly magical. The Baroque flute is a deceptively simple instrument — how hard can it be to blow into it and move your fingers? — no reeds, no nasty and temperamental gut strings, no physically exhausting embouchures!

But the Baroque flute is hard to play in tune. It’s difficult if not impossible to play loudly. And quirks of its construction imbue it with subtly different tonal qualities in different registers — indeed, almost from note to note. Yet these very difficulties and inconsistencies are part of its beguiling beauty. The challenges it presents mean that every note, every tone, is hard-won, special, unique. To hear it well played is to revel in nuance, suggestion, playfulness, nobility, and a kind of demure voluptuousness. 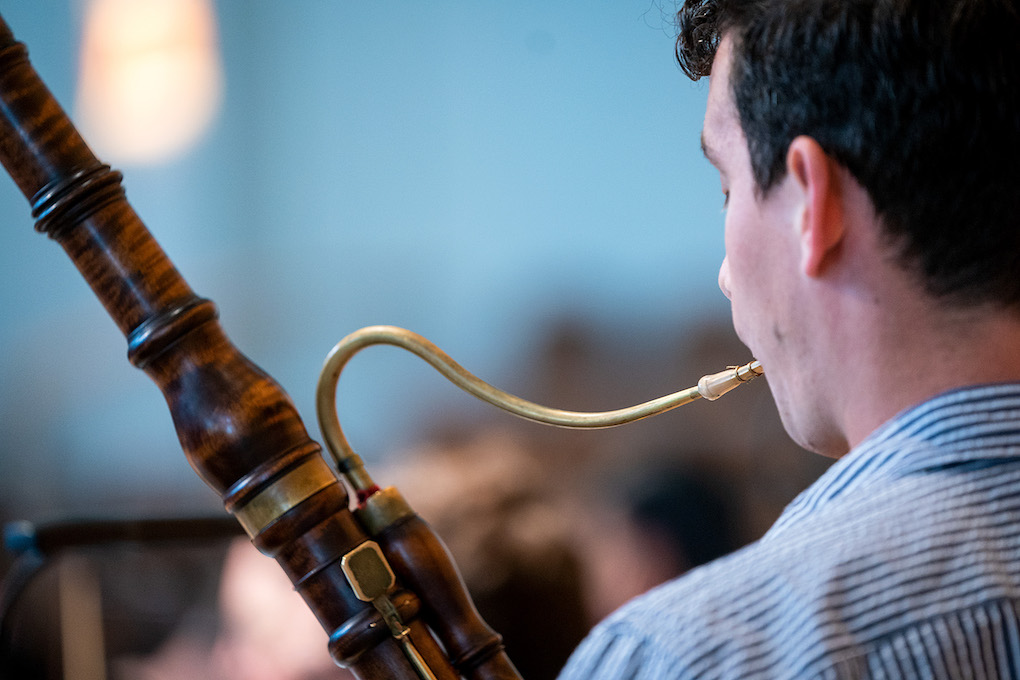 The main visual difference between the Baroque and modern bassoons is the number of keys. The Baroque instrument has five keys, whereas the modern instrument has 24. An equally important difference, that you can’t see, is the shape of the bore or inside of the bassoon. A Baroque bassoon has a larger bore than the modern instrument, which gives it a warmer, rounder sound that’s especially beautiful for playing continuo (bass) lines. The narrow, hard-rubber-lined bore of a modern bassoon makes it more of a tenor voice that can project very well in a big modern orchestra. Also, Baroque reeds are much larger than their modern counterparts, further contributing to the warm, flexible sound of the earlier instrument.

Some of my favorite Baroque bassoon composers are Vivaldi, Fasch and Rameau. They all wrote so prolifically and idiomatically for the instrument. We bassoonists are incredibly lucky to have almost 40 concertos by Vivaldi, which are, by and large, all unique and range in expression from soulful to virtuosic to quirky. Fasch wrote piles of ensemble sonatas and orchestral works with great obbligato bassoon lines that show off the instrument well and are really fun to play. Perhaps the most gratifying Baroque music of all to play for a bassoonist is that of Rameau’s operas. He clearly loved the bassoon and really knew how to exploit its unique color and range.

More instruments will be added — check back again soon!