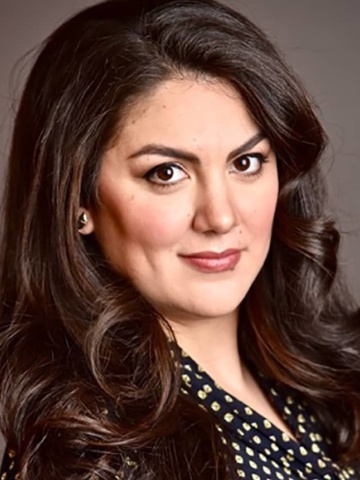 Mexican mezzo-soprano Gabriela Flores is currently a resident artist at the Academy of Vocal Arts in Philadelphia, where she studies with Bill Schuman. There she made her debut as Azucena in Il Trovatore under the baton of Christofer Macatsoris. At AVA she has also performed such roles as Dryad in Ariadne auf Naxos, Dorabella in Così fan tutte and Stéphano in Roméo et Juliette. Prior to her performances in Philadelphia, she performed in renowned theaters in Mexico, including the Palacio de Bellas Artes, where she sang several roles including Giannetta in L’elisir d’amore. She has sung Amastre in Xerxes at the “Oberlin in Italy” summer school, Lola in Cavalleria Rusticana with Mexico’s National Conservatory, Baucis in Haydn’s Philemon und Baucis, and Rosita in Derbez’s La Creciente in its world premiere at the Festival Internacional Cervantino with Estudio Ópera de Bellas Artes. Flores’s concert appearances include Handel’s Messiah with the Politecnico Nacional Symphony Orchestra, Mozart’s Requiem with Celaya Symphony Orchestra, and Beethoven’s Symphony No. 9 with the Yucatán Symphony Orchestra. She was a finalist in the Mexican competition “Concurso Nacional de Canto Carlo Morelli” in 2012 and an encouragement award winner in the Metropolitan Opera’s Middle Atlantic Regional Auditions in 2019.