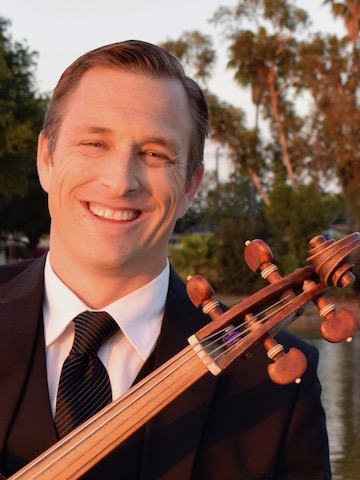 Leif Woodward is an alumnus of the USC Thornton School of Music where he graduated Pi Kappa Lambda. In addition to his Doctoral degree from the University of Southern California, Leif holds Master of Music and Bachelor of Music degrees from the San Francisco Conservatory of Music. He currently teaches at Mount St. Mary’s University and at the Orange County School of the Arts, and has been a guest instructor at the University of Southern California, UC Riverside, and the Colburn School.

Woodward performs with groups such as Tesserae, Musica Angelica, Los Angeles Master Chorale, Pacific Chorale, and Long Beach Symphony Orchestra. He has appeared at the Carmel Bach and San Luis Obispo Mozart Festivals, and is a regular performer at the Baroque Music Festival, Corona Del Mar. He plays a German cello built around 1720, maker unknown, and his viola da gamba is a John Pringle 2009 copy of an instrument by Henry Jaye of 1624.

Leif Woodward is a featured artist in The Joy of the Dance on Friday, June 24, 2022.