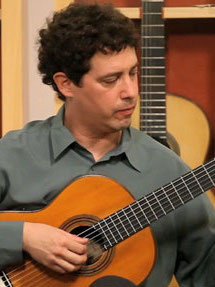 Marc Teicholz was the first prize-winner of the 1989 International Guitar Foundation of America competition. He has performed extensively throughout North America, Europe and Russia, receiving critical acclaim for his recitals and master classes, and has toured Southeast Asia, Fiji and New Zealand under the auspices of the USIA’s Artistic Ambassador program. He has recorded several solo CDs for Naxos and other labels, as well as the pilot soundtrack for George Lucas’s Young Indiana Jones, and has worked with many composers to produce new guitar literature. Valseana, a solo CD of waltzes recorded on vintage instruments, was named by Acoustic Magazine as one of the 10 best CDs of 2011; the magazine later named his recording of music of Ernesto Nazareth as one of the 10 best CDs of 2016.