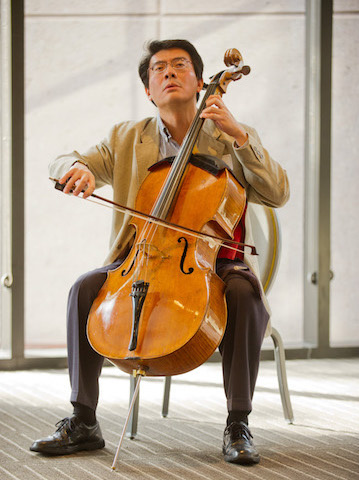 Timothy Landauer, a beloved cellist long affiliated with the Baroque Music Festival, Corona del Mar, died in April 2019 after a lengthy struggle with cancer. He was 56.

Landauer was hailed as “a cellist of extraordinary gifts” by the New York Times when he won the Concert Artists Guild International Award of 1983 in New York. He went on to win numerous prestigious prizes, including the Gregor Piatigorsky Memorial Cello Award and the Hammer-Rostropovich Scholarship Award. He performed as a soloist with orchestras around the world, and was principal cellist of the Pacific Symphony at the time of his death.

It was while he was earning his master’s degree in cello at USC more than 30 years ago that Landauer first met Burton Karson, who had co-founded the Baroque Music Festival in 1981. “Tim and I shared acquaintances with a remarkable faculty in music,” recalls Karson, “and our mutual admiration grew over the years.” The young cellist first performed in our Festival in 1995, then returned to play almost every season through 2017. As both a soloist and chamber ensemble member in our concerts in the Sherman Gardens, he became a perennial Festival favorite.

“Tim was a wonderful man and a splendid musician,” Karson says. “Working with him was like engaging a musical angel.” All of us will miss his gorgeous sound, his amazing technical proficiency and his warm friendship.