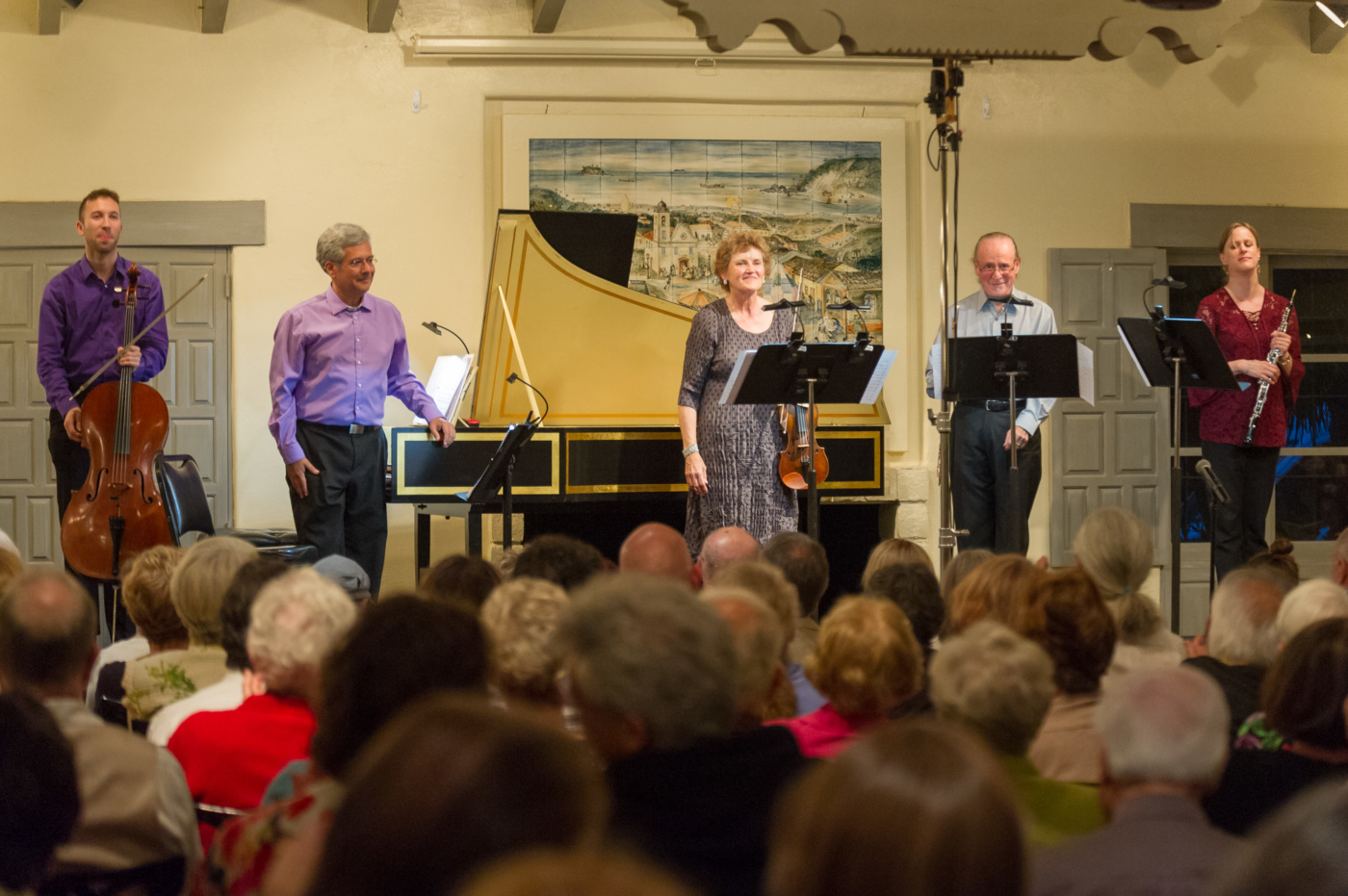 This concert was underwritten through the generous donation of Elaine Sarkaria

Reception in the Gardens

If you attended Wednesday’s concert, you noticed that many Baroque-era musicians and composers shared bonds of mutual friendship and professional esteem. This was no mean feat, given how geographically dispersed most of them were, and it’s testimony to the enduring strength of human social and professional drives. Nowadays, contact is easily maintained on a global level, thanks to the internet, but of course it was not always so. The relationships among tonight’s composers are overall a more mixed bag, and reflect bonds based on admiration, kinship and rivalries, as well as esteem and friendship.

We begin with a charming concerto da camera by Vivaldi. Though Vivaldi was not a “son, friend or rival” of J.S. Bach, Bach studied, copied out and arranged several of his works. In particular, Vivaldi’s extremely popular take on the concerto clearly struck him as worthy of imitation.

The first movement of the Chamber Concerto evokes the titular pastoral character by means of simple dancey figures and animated chirpy motifs. Vivaldi, in his chamber concerto slow movements, often opts for a single solo line, usually the flute, with only basso continuo accompaniment. Occasionally he fleshes out the harmonies with accompanying figuration from the violin. Here he gives figuration to both the violin and the oboe, and in addition gives the bass soloist an ornate version of the bass line, resulting in an unusually rich texture. The third movement is vintage Vivaldi: bright, happy, repetitive figuration, leavened with peculiar and unexpected phrase lengths.

Johann Christoph Graupner has connections to more than one of our program’s composers. He was a student of Kuhnau, about whom more shortly, and competed with Telemann for the position of cantor in Leipzig (and played harpsichord in a Hamburg orchestra alongside the 20-year-old violinist Georg Friedrich Handel!). Due to a lengthy legal battle following his death between his family and his court employers over the rights to his manuscripts, his music disappeared for so long that his style was no longer in favor when it resurfaced. He was a capable and innovative composer, though, and he and his music are gradually making a comeback.

His compact Trio Sonata in B minor is a stylish little winner. The first movement is catchy and clever, the second languorous and ornamental — reminiscent of C.P.E. Bach — and the last is a jumpy jig that keeps getting fixated on a tiny rhythmic figure. If any of you can remember your record player needle getting stuck in an LP groove and repeating a snippet of music over and over, you will have déjà vu!

Johann Kuhnau, who served as Thomaskantor in Leipzig for the last 21 years of his life (at which point J.S. Bach got the job), was an extremely clever and energetic man — polyglot, novelist, lawyer, and brilliant organist. His surviving music includes some sacred vocal works, a small handful of organ pieces, and four sets of suites and sonatas for harpsichord, upon which his excellent but circumscribed reputation rests.

Our Kuhnau selection is the second of a set of seven sonatas entitled Frische Clavier-Früchte (“Fresh Fruit of the Keyboard”) published in Leipzig in 1696. The subtitle in the original edition was “Seven sonatas of good invention and good manner, to play at the harpsichord.” Herr Kuhnau himself testified that he composed the entire set within a week, writing the rate of one sonata per day.

The set was dedicated to the Bohemian aristocrat and Baroque lute player Jan Antonín Losy, Count of Losinthal. There is no evidence that Losy played the harpsichord, but Kuhnau seems to have held him in high esteem. In any case, Frische Clavier-Früchte was one of the most popular collections of harpsichord works Kuhnau composed; during his lifetime it was published in more editions than any of his others, and after his death it was the first one to be reissued.

Each of the seven sonatas in Frische Clavier-Früchte is made up of either four or five moments, most of which have no titles or even tempo markings. This second sonata has five moments, but only the second and fourth are marked — Molto Adagio and just Adagio, respectively — leaving the performer with a high degree of interpretive latitude.

Music historians often stress the novel aspects of C.P.E. Bach’s compositions — such as his development of Empfindsamkeit, the “sensitive style” — and find a thread of musical continuity running from J.S. Bach through this son and on to Haydn and Beethoven. While this is undoubtedly valid, it ignores influences from other composers of his father’s generation, particularly Graupner and Telemann. I observed earlier that the slow movement of Graupner’s trio was reminiscent of C.P.E. Bach, but in all fairness, since Graupner’s trio was composed in 1744 and C.P.E.’s was revised in 1747, it’s not entirely clear who may have been influencing whom.

The new, post-Baroque galante style that was a central part of C.P.E.’s world was significantly shaped by the long-lived and savvy Telemann; Papa Bach had employed a lot of dramatic rhetoric, too, and his son took all this and ran with it. I’m not suggesting that Carl Philipp does not deserve his kudos, but simply pointing out that he did not create an entirely new style from nothing. Rather, he absorbed what he found around himself and brought it into new territory, something most great composers do.

All this said, his Trio Sonata in C major is not exactly a groundbreaking work. The first movement could have been composed by his tuneful youngest brother, Johann Christian, the “London Bach”; and considering that I was unable to work this son into tonight’s program, that may be a good thing! C.P.E.’s trademark style is more evident in the slow movement, full of chromaticism and trouble, in C minor. (Mattheson: “All languishing, longing, sighing of the love-sick soul lies in this key.”) The last movement offers the flute and oboe somewhat more developed solos, each suiting those instruments nicely.

The second half of our program is largely devoted to that jack-of-all-musical-trades, Georg Philipp Telemann. A close friend to J.S. Bach, and godfather to C.P.E., the incredibly prolific Telemann mastered the Italian, French, English, German and Polish styles of his time, concocting a kind of pan-European sensibility from them. He wrote secular and sacred works as well as operas, delved into various exotic ethnic traditions, and managed to stay au courant in the rapidly changing post-Baroque environment.

Hermann Helmholtz, a 19th-century polymath who developed theories about musical keys that sometimes contradicted those of Mattheson, felt that the key of G minor conveyed “softness, pensiveness, and even melancholy” — a near-perfect descriptor for the first movement of our Trio Sonata in G minor. The second movement is alert and animated. The third is constructed with, as it were, introductory and closing remarks in the style of Corelli, with a gorgeous filling à la Handel — an homage to the Italian style. The last (and highly energized) movement is composed in rondo form, with three appearances of the theme separated by two entertaining digressions.

Bach’s eldest son, Wilhelm Friedemann, though a brilliant keyboardist and improviser, never quite made his mark as a composer. He had trouble finding employment, and trouble staying employed once he did. Apparently a difficult man, and possibly alcoholic as well, he was in poverty by the end of his life. It must not have been easy being the oldest son of someone like J.S. Bach.

Many of W.F.’s compositions seem to run somewhat off the rails, both in their formal structure and in how they try to pack in too much disconnected material. This speaks to his improvisational prowess, possibly, but casts shade on his compositional gifts. The Lamento from his keyboard sonata is a reasonably coherent example of his work, and is dramatic and heartfelt.

Telemann does not appear to have composed many cello sonatas, but his Sonata in D major is simply brilliant. In addition to his many aforementioned masteries, Telemann also mastered the rhetorical art of surprise. As you listen, see how often you think you know what’s coming next. Then ask yourself: did it? Not so much! If this were the only skill he employed here, it would be almost enough — he’s so good at it — but he also manages to stuff every movement with beauty and high spirits throughout.

We close with Telemann’s little Quartet in G major. The piece is all of the things you might generally expect from Telemann: lively, sweet, imitative, conversational. Everything, that is, with the possible exception of the carnivalesque antics so present in his cello sonata!