Back to Bach Concertos 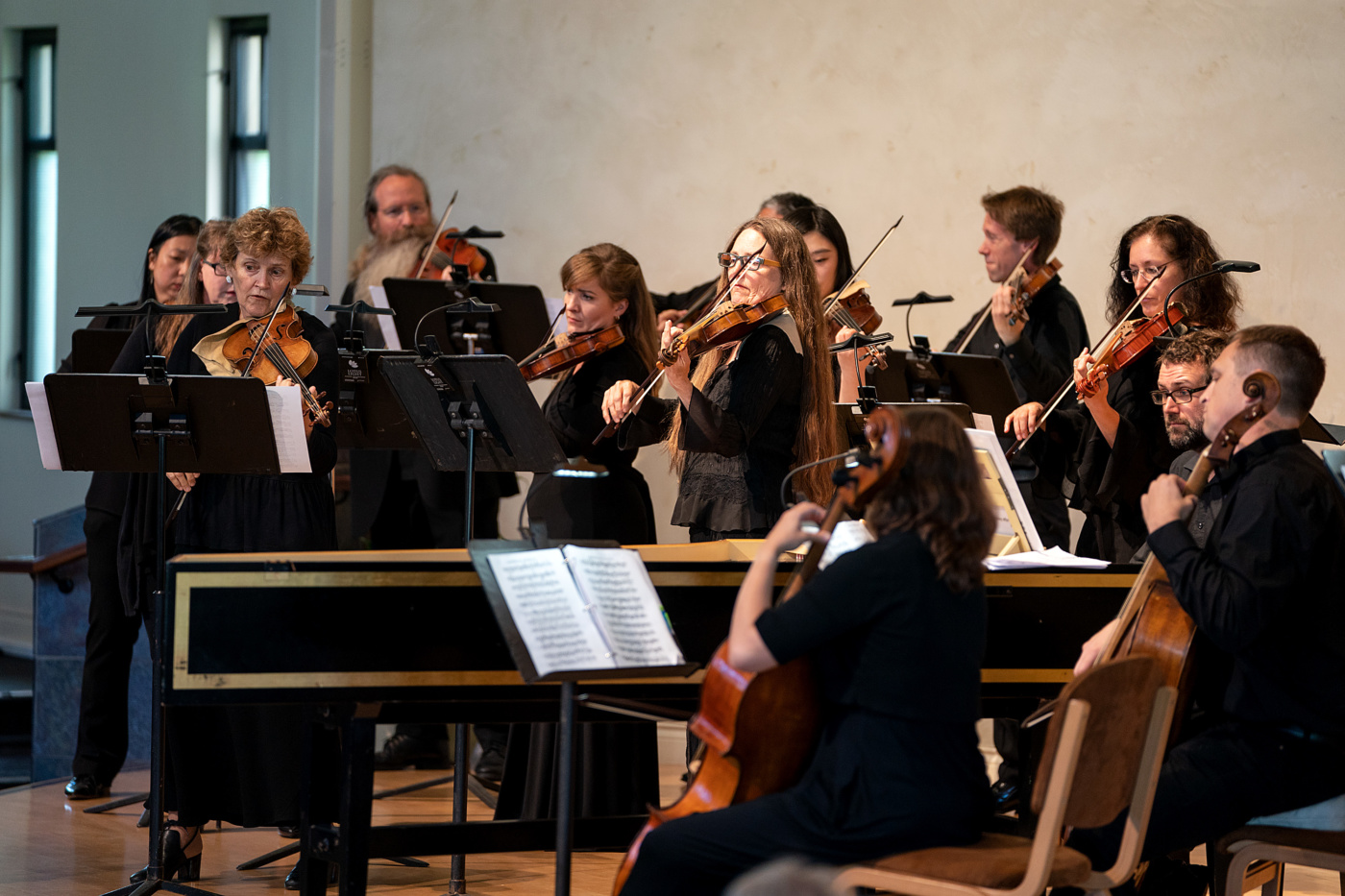 Back to Bach Concertos

Notes on the Program

Welcome to our second quadrennial mini-Bach festival! We’re starting right out with two grand works by our eponymous honoree, one of his four orchestral suites and one of his six Brandenburg concertos.

In terms of instrumentation, the four orchestral suites are different from each other, though not nearly as much as the Brandenburgs are different from each other. The two most similar are the third and fourth suites (we will perform No. 4 on this season’s final program), both very grandly scored with trumpets and timpani in addition to the first suite’s fairly basic complement of strings, oboes and bassoon.

The scoring of the Suite No. 2 in B minor stands out as the most introverted and delicate, just strings and a flute. If this scoring suggests the piece might be a sort of flute concerto, well — no. Even though Bach is famous for liking to mess about with hybridizing forms, a suite is a collection of dance movements, and this very French suite sticks rigorously to the form. The most substantial flute solos occur in the allegro section of the Overture, the double of the Polonaise, and the now-world-famous Badinerie (thank you, James Galway!). There are a few more solo breaks here and there, but the suite seems to be about featuring the varied affective qualities particular to the flute. These qualities run a lovely gamut from conversational, flowing, melancholy, fleet and proud, on through resolute and graceful to highly animated.

It is perhaps worth mentioning that, of all the Baroque instruments that survived the era, the flute was arguably the one most dramatically changed. The revolutionary shift from wood to metal transformed the flute into an instrument that could hold its own in the dynamically supercharged modern orchestra. In my opinion, though some qualities were gained, those that were lost were truly magical. The Baroque flute is a deceptively simple instrument — how hard can it be to blow into it and move your fingers? — no reeds, no nasty and temperamental gut strings, no physically exhausting embouchures!

But the Baroque flute is hard to play in tune. It’s difficult if not impossible to play loudly. And quirks of its construction imbue it with subtly different tonal qualities in different registers — indeed, almost from note to note. Yet these very difficulties and inconsistencies are part of its beguiling beauty. The challenges it presents mean that every note, every tone, is hard-won, special, unique. To hear it well played is to revel in nuance, suggestion, playfulness, nobility, and a kind of demure voluptuousness.

Bach’s Brandenburg Concerto No. 5 is one of a small handful of iconic Baroque instrumental works, along with (among others) its five sister concertos, his Goldberg Variations, Vivaldi’s Four Seasons, Tartini’s Devil’s Trill, and Corelli’s concerti grossi. Nominally scored for flute, violin and harpsichord, it is maybe more accurately viewed as an enriched harpsichord concerto. (In this, it is similar to the 4th Brandenburg, scored for two solo recorders, violin and string orchestra, which leans very heavily on the violin for its thrills.)

The first movement is an expansive journey filled with many long and wondrous episodes. The last of these segues into one of the great surprises in the history of Western music: a massive cadenza for the harpsichord, crammed full to bursting with suspense, vitality and unequalled virtuosity, lasting almost half as long as the movement itself up to that point. Unheard of!

The lovely and melancholy slow movement, composed for just the three solo instruments, shares its material even-handedly among the three, creating a sort of tender trialogue. Formally, the movement is constructed in something like ritornello form, which is common enough in concerto fast movements. Bach actually writes many of his concerto slow movements with unique opening material that recurs in the middle and at the end. When there is an orchestra accompanying the soloists, this is a texturally great way to set off the solos, but it’s fun to watch him manage this when only the soloists are playing.

The last movement is a gigue. Ah! A dance movement in a concerto: here is Bach’s predilection for formal cross-fertilization. But what a gigue: huge and undanceable! And what an arsy-versy ritornello, beginning with the soloists. The orchestra cools its heels for almost 30 bars before being invited in.

Johann Friedrich Fasch, a violinist and composer, was a student of Kuhnau and Graupner, two of the composers on our Friday program. He was also clearly aware of and sensitive to the works of Bach and Telemann.

The first movement of his Concerto in F major for recorder is quite Bach-like in its basic figurative language, but shows little evidence of Bach’s ever-present desire to work out the implications and possibilities of every element he has assembled. It therefore remains a simpler creation, sprightly, nimble and pleasing.

The slow movement is little but a harmonic and rhythmic scaffolding provided by strings, upon which the soloist is set free to devise the most beautiful, ornamental edifice within her improvisational reach. The gigue-like last movement could almost have been written by Telemann, with its lively, entertaining theme, and occasional quirky phrase lengths.

Jean-Marie Leclair, also a violinist as well as a composer, wrote at least a dozen violin concertos, and undoubtedly performed many of them for Les Concerts Spirituels, that esteemed Parisian concert series we explored last year. His Concerto in A major is a typically lighthearted, pleasing and energetic affair.

You will notice that both of the Allegro movements are tempered by the words ma non troppo (“but not too much”). Because virtuoso violinist-composers wanted to give themselves impressive and complicated things to do, it’s surprising when instructions like this appear. But they help assure that fancy solo passagework is taken at a manageable tempo, while at the same time heightening the contrast between the solo work and the less flashy orchestral writing.

The Adagio is unusually lovely. Orchestral sections of startlingly intense harmonies alternate with solo violin passages of persuasive candor, accompanied only by the basso continuo. The last movement is yet another example of Leclair’s formal, harmonic, figurative understanding. While there appear to be no extant written-out cadenzas for Leclair’s concertos, there almost always seems to be an opportune moment to insert one!

The Telemann concerto for recorder and flute, the only one for this pair of instruments I’ve ever seen, is pretty much a perfect example of the German High Baroque concerto. Where Italian and French composers (and Bach, that frequent crypto-Italian!) favored a three-movement concerto form — fast, slow, fast — quite a few German composers seemed to prefer the sonata model consisting of four movements — slow, fast, slow, fast.

You might imagine that the difference between the two models would be a straightforward matter of length. Curiously, though, that does not seem to be the case. The difference comes down to the feel of the piece: if you are greeted straight off with intense, fast-moving action, that simply feels different from being treated first to something in a more contemplative, tender or serious mood.

Telemann’s simple, interlocking, repetitive rhythmic figures in the first movement generate a gentle insistent tension, which is not released until… the Allegro, a boisterous, combative swirling affair. The third movement begins with simple and touching chords from the string band, worthy of a Handelian opera scene, and what follows has the feel of an operatic aria. In fact it actually sounds very much like Jupiter’s “Where e’er you walk” in Handel’s Semele.

Telemann was an avid student of ethnic styles, from Eastern Europe to Turkey, and this fascination with the exotic informs the wild last movement. Full of bizarre phrase lengths, peculiar harmonies and obsessive whirling-dervish-like figures, it is a spectacular and very unusual finish to an already superlative piece.