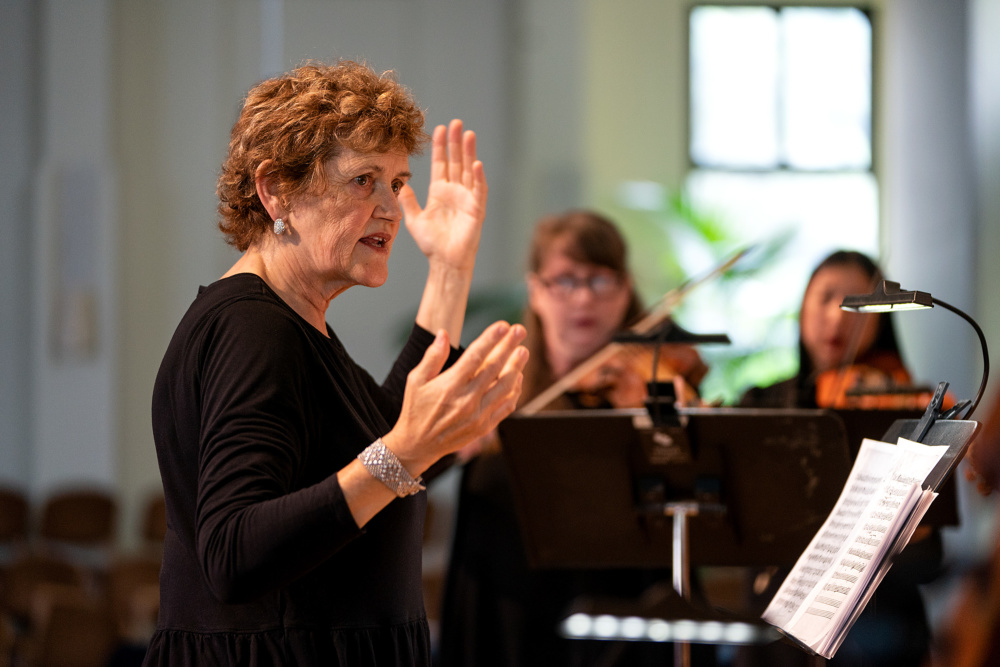 This concert was underwritten through the generous
donations of Dr. Vina R. Spiehler and Dr. Terri Munroe

Reception on the Patio

If you attended our opening concert last week, you heard the most modestly scored of Bach’s four orchestral suites. Today we begin with arguably the grandest of these splendid works, the Orchestral Suite No. 4. It narrowly edges out the third suite in instrumentation, having a third oboe and a bassoon in addition to the third suite’s three trumpets, timpani, two oboes, strings and harpsichord.

Both the third and fourth suites are in D major (the Baroque trumpet’s happy place), and both are on the scale of Handel’s Water Music and Music for the Royal Fireworks — celebratory, majestic works fit for kings and public ceremonies. The four suites, which Bach entitled ouvertures, do not appear to have been composed for any particular personage or event, so Bach probably wrote them simply out of interest.

The first movement, always the most substantial, is huge in terms of length, orchestration and impact. It opens with an imposing slow section that consists mostly of three simple elements for the reeds, strings and continuo — the ubiquitous dotted rhythms of French overtures, scale-based 16th notes, and long sustained notes — punctuated by brilliant staccato bursts from the three trumpets and timpani. This introduction leads to the main section, an allegro in 9/8 time, a meter associated with gigues, though this is more like epic whitewater rafting than any dance!

Bach deploys his instruments cannily, as always, playing the trumpet, double reed and string “bands” off against each other. The result is one of Bach’s most mesmerizing orchestral allegros.

The energetic first Bourrée continues to play the three bands off against one another; the mellower second Bourrée drops the trumpets entirely, reduces the upper strings to a single unison part, and gives the bassoon an astonishing (and relentless) running solo line, above which the three oboes honk together in suave, concerted commentary. The Gavotte is seemingly stolid, weighed down as it is by the presence of the entire orchestra, but Bach injects humorous and enlivening elements in the form of jazzy offbeats and caffeinated figuration in the bass. The graceful first Menuet drops the trumpets; the second Menuet then drops the reeds, leaving the strings to offer the most intimate moments in the whole suite. One doesn’t think of minuets as slow movements, but this is as close to one as Bach gives us here.

The closing jubilant and frankly wacky Réjouissance (“rejoicing”), in 3/4 time, brings back the trumpet/timpani band from the Overture; the densely contrapuntal writing is packed with trills and syncopations, and includes a couple of brief but profoundly disorienting stretches in which the top and bottom voices play in 4/4, but two beats apart, while the other voices remain in 3/4. My hat is off to anyone who can count steadily in three throughout this movement!

Musicologist Margaret Bent writes that a motet is “a piece of music in several parts with words,” a fine definition of this ancient form. The 13th-century theorist Johannes de Grocheo wrote that the motet was “not to be celebrated in the presence of common people, because they do not notice its subtlety, nor are they delighted in hearing it, but in the presence of the educated and of those who are seeking out subtleties in the arts.” By the time of the Renaissance, though, the form was veering from mostly secular to sacred uses, so presumably every class of people was treated, at least occasionally, to motets in church.

Bach’s Singet dem Herrn ein neues Lied is scored for two choirs of four voices each, but it was not uncommon practice to double the vocal parts by adding two instrumental quartets. We have opted to add a quartet of strings and a quartet of double reeds for today’s concert. There are three sections to this piece; the text of the first consists of lines from Psalm 149, all joyful and celebratory, set to buoyant and vigorous music.

In the more reflective (and strikingly set) second section, Choir II sings a chorale with text from 15th-century hymnodist Johann Gramann’s adaption of parts of Psalm 103. Each phrase of the chorale is interrupted by Choir I, which sings an entirely different text in a livelier and more contrapuntal style. Choir II’s text stresses God’s love for his fragile and impermanent creations, while Choir I addresses God directly, beseeching him for support and protection.

In the third section, the two choirs become one. The text is taken from verses 2 and 6 of Psalm 150, with each line set completely differently. In the setting of verse 2, while there is still some counterpoint (could Bach ever do entirely without it?!), the choir often delivers its words simultaneously, in the same rhythms, a technique called homophony. Line 6 of the psalm is set to a swift-footed fugue in 3/8 time that builds to a thoroughly riproaring Hallelujah.

Bach composed the Magnificat (the biblical canticle known as “The Song of Mary”) in Leipzig in 1723, but revised it some ten years later. This later version is the one most often performed. In Leipzig, German-language settings of the Magnificat were sung on regular Sundays, but this lavish Latin setting was reserved for Christmas, Easter, Pentecost, and on the three Marian feasts of Annunciation, Visitation and Purification.

The piece consists of a seemingly random sequence of choruses and arias, including a duet and a trio. But of course this is Bach, and nothing is really random. As usual, the texts provide some insight into Bach’s choices. The opening text, all about magnifying the Lord, is “magnified” by virtue of being scored for all performers. The Et exultavit refers to the rejoicing of Mary’s spirit in “God, my Savior,” a very personal business, and is given to a solo soprano, punctuated by little leaps of joy from the accompanying strings.

The profound Quia respexit, another soprano solo, focuses on the humility of Mary, but when she says that “all generations shall call her blessed,” a chorus powerfully depicting “all generations” erupts. Fecit potentiam, Mary’s very personal recognition of the great things done for her by the “Mighty One,” is given to a mighty solo bass voice, with a robust accompanying bass line. God’s mercy is beautifully depicted in the Et misericordia, in the style of a Siciliana, with alto and tenor solos weaving gracefully and gratefully through it. The “strength of his arm” of Fecit potentiam is shown by a strong chorus, while the powerful are brought down in Deposuit by — who else — a tenor! Note the savage falling figures depicting the deposing, and the equally powerful rising figures depicting the elevation of the lowly.

In Esurientes, the hungry are fed and the rich “sent away empty”— a notion that clearly pleased Bach, who set this cheerful, almost smug aria for alto with the accompaniment of two felicitous flutes. Note the “empty” note at the very end: it’s all right if you laugh out loud, you are rejoicing along with Bach! God’s help and mercy manifest in the ethereal Suscepit Israel, mostly by dint of three mutually supportive high voices, stunningly accompanied by unison oboes playing an ancient plainsong version of the Magnificat. Sicut locutus est references ancestors and descendants; this multitude is suggested by the return of the choir.

This chorus is actually the end of the canticle, but Bach closes the work with a powerful Gloria Patri, “Glory to the Father, the Son, and the Holy Spirit.” Note the emphatic homophony on the words “Father,” “Son,” and “Spirit.” The rest of the text, “As it was in the beginning, is now, and ever shall be,” is set to…. the very same music Bach used “in the beginning” of the piece!