Glories of the Guitar 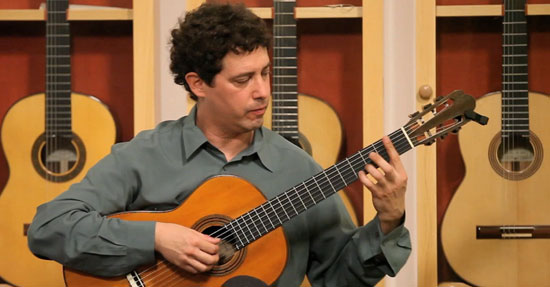 Glories of the Guitar

Reception on the Patio

Notes on the Program

Alonso Mudarra was a Spanish composer whose works for the vihuela (a 15th-century double-strung guitar) and four-course guitar are some of the earliest ever published. He composed Fantasía X, subtitled “Fantasía que contrahace la harpa en la manera de Luduvico,” for the vihuela in 1546. As its subheading indicates, the fantasia sets out to imitate the playing of the legendary harpist Luduvico el del Arpe, who served Ferdinand II of Aragon, and who used chromatic dissonances in his playing.

Mudarra’s Fantasía replicates Luduvico’s style, and even includes the following cautionary note toward the end of the piece: Desde aquí hasta cerca del final hay unas falsas; tañéndose bien no parecen mal (“From here to near the end there are some dissonant notes; played well, they are not displeasing”).

Santiago de Murcia was born in Madrid. This Italian-styled, three-movement sonata was discovered in his Saldivar Codex No. 4, which is a collection of popular songs and dances. The Baroque guitar, the instrument for which this piece was conceived, hosted only five strings (some double-coursed) and used a “re-entrant” tuning whereby the strings were tuned from high to low and then back to high again with the last strings.

This provides some challenges when adapting this piece to the six-string modern guitar: it is not always obvious whether the note in question is to be played an octave higher or lower. Whatever limitations may be found in this arrangement, however, de Murcia’s ability to blend Italian charm with Spanish flair is highly evident in this delightful work.

The Partita No. 2 in C minor, which Johann Sebastian Bach wrote for the harpsichord in 1726, was published with five others in 1731. Each partita consists of a collection of dances.

The suite opens with a powerful Sinfonia in three sections: the first dramatic in the French style, the second tender and gently swinging, the last a lively and brilliant little fugue. The following Allemande is flowing and melancholy, while the Courante is vigorous and impulsive. The ensuing Sarabande has a deceptively simple texture but contains complex and clever counterpoint — a model of sensitivity and grace. A witty Rondeau follows, while the closing audacious Capriccio employs a dense counterpoint that barely fits on the guitar. (In truth, on the guitar, some of the larger leaps must be compressed, but please don’t tell anyone.)

Francisco Bartolomé Sanz Celma, better known as Gaspar Sanz, was a Spanish composer, guitarist, organist and priest. He studied music, theology and philosophy at the University of Salamanca, where he was later appointed professor of music. He wrote three volumes of pedagogical works for the Baroque guitar that form an influential part of today’s classical guitar repertory. Later composers such as Falla, Rodrigo and Warlock have all used Sanz’s melodies in their compositions. His setting of the popular Canarios from the Canary Islands, for which the meter alternates between 6/8 and 3/4 time, is one of his most famous works.

The Sonata in E minor, which Bach composed for flute and basso continuo sometime between 1724 and 1726, was written in the form of a sonata da chiesa, or church sonata. This means that instead of a compilation of dances, it harkens back to the slow-fast-slow-fast four-movement form favored by Corelli. Although the form appears to be in the more austere church sonata style, the last three movements are in fact dances in all but name.

The first movement is a meditative and flowing discussion between treble and bass. The second is a cheerful fugal dance interspersed with lively arpeggiated episodes. The third movement, simply introduced with a spare bass line, is a sublime and tender aria in G major. The work concludes with brilliant obsessive energy.

Domenico Scarlatti, who shares the same birth year as Bach and Handel, was born in Naples when the Kingdom of Naples belonged to Spain. He was the sixth of ten children of the composer and teacher Alessandro Scarlatti. His 555 keyboard sonatas are single movements, mostly in binary form and mostly written for the harpsichord or the earliest pianofortes. These works often display harmonic audacity in their use of discords, and also unconventional modulations to remote, sometimes surprising keys.

The influence of Iberian (Portuguese and Spanish) folk music is a notable feature in Scarlatti’s music. He often used the Phrygian mode favored by flamenco music and other tonal inflections not often heard in European art music. Many of Scarlatti’s figurations and dissonances are also suggestive of the Spanish guitar. The sonata in this program was originally written in F major but transposed to G major to make it more playable on the guitar.

Antonio Soler — or, to give him his full name, Padre Antonio Francisco Javier Jose Soler Ramos — was born in Catalonia and began his musical (and religious) training at the age of six in the famous monastery of Montserrat. At age 23, Soler took holy orders and undertook 20-hour workdays in El Escorial. During his tenure there, he produced more than 500 compositions, including 150 keyboard sonatas, many believed to have been written for his pupil Gabriel, the young son of King Charles V. These sonatas show a strong familiarity with those of Scarlatti but also show influences of a more galante, classical style as well.